PMG Take Care of The BIG Clean Up For Rainbow Run 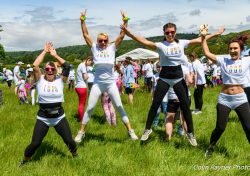 1,000 people turned up in their white t-shirts and emerged from the 5k route covered in all colours of the rainbow.

This is the first year the event has been held at the Showground, which is a stone’s throw from Children’s Hospice South West Charlton Farm hospice in Wraxall.

Hollie Thorogood, Events Fundraiser at Charlton Farm said “Rainbow Run never fails to delight everyone who takes part. It’s not a race, it’s a fun day with family and friends raising funds for a truly wonderful cause. We would like to thank everyone who made the day a success, especially our 90 volunteers without whom, this event couldn’t happen.” 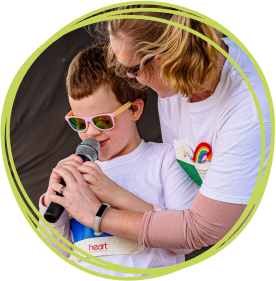 Taking to the stage before the event was Kali from Bridgwater, whose daughter Tayen, along with her family, is supported by Charlton Farm. Kali said, “I always find it difficult to put into words just how much Charlton Farm means to our family. It’s just like a home-from-home, but your meals are cooked for you, we get to have a break and I get to drink coffee while it’s still hot! Tayen and her brothers love it.”

How Much Does The Charity Hope to Raise?

The charity hopes to raise £50,000 in sponsorship from the participants. This could be enough to pay for music therapy for three years for the children staying at the hospice.

Children’s Hospice South West would like to thank Clevedon-based PB Design & Developments, Southern Co-operative and Cabot Circus for generously sponsoring this year’s event. Also, PMG Services Bristol for their continued help with the clean-up of the site after the run.

For more information about other events that PMG have been involved in, why not give some of our other blogs a browse?